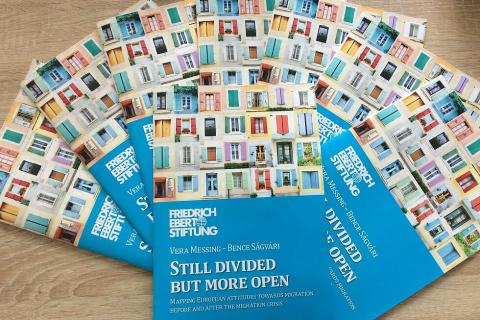 A new study has been published by Friedrich-Ebert-Stiftung Budapest on mapping European attitudes towards migration, edited by CPS Research Fellow Vera Messing and Bence Sagvari, both researchers at the Centre for Social Sciences (HAS).

The study investigated cross-national differences in attitudes towards migration and migrants across European space and time, and aimed to discover factors that may lie behind the immense differences in the acceptance or rejection of migrants across European countries. The results show how attitudes have changed from before to after the 2015 migration 'crisis', and also draw a wider picture of attitude shifts in 15 European countries between 2002 and 2016/17.

One important conclusion of the analysis is that attitudes towards migration in Europe have generally become more positive in most countries since the 2015 refugee crisis. The level of rejection between 2014/15 (before the flow of mass migration to Europe occurred) and 2016/17 (after the migration shock) has decreased from 15% to 10%. Thus, in general, popular attitudes do not support the flourishing anti-migrant populist political discourse, and by the same token, increasingly loud anti-migrant populist narratives have not boosted the rejection of migrants. People on the continent have not become more fearful of migrants; on the contrary, in most countries they have become slightly more positive about them. Outliers include Portugal, Belgium, the UK and Ireland, where people have become significantly more open and positive about migrants compared to the pre-migration crisis period, and Hungary, where general attitudes towards migrants have significantly deteriorated.

The article is available on the Friedrich-Ebert-Stiftung Budapest website here.