Bringing Gender in Politics to CEU 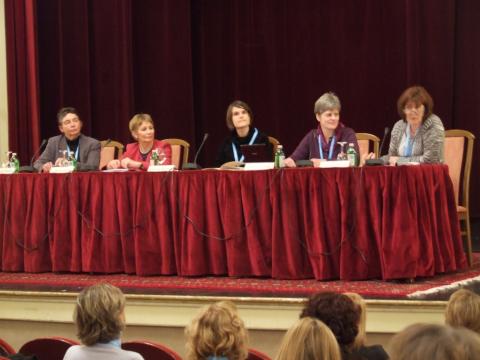 The event has brought more than 300 scholars to CEU, each working on all aspects of gender and politics: how gender makes a difference in politics, how politics and policies and actors involved conceptualize, institutionalize and contest gender equality in politics, how gender should be understood in relation to other inequalities in politics, or what specific research and methodological questions this raises. Participants included the most prominent representatives of the field from Europe, North America and Australia. The event also included an impressive presence of graduate students and recent PhD graduates working on topics related to politics and gender. Several CEU faculty, PhD students and alumni from across a range of departments presented papers or attended the conference. The conference hosts were the Center for Policy Studies and the Department of Gender Studies, and the Center for Policy Studies acted as the local organizer.

The conference discussed the main challenges and opportunities ahead of gender equality in the European context and beyond, particularly with reference to the impact of the recent economic crises, and in the context of the overall European trend towards more right wing, conservative and often xenophobic politics. The conference was opened by Katalin Farkas, Provost/Pro-Rector/Professor, Department of Philosophy, CEU. In her speech she emphasized the importance of the topic and the social responsibility CEU has in this field as a critical and visionary academic institution.

The roundtable on gender equality in the European Union with the participation of scholars such as Yvonne Galligan, Queens University, Ireland, who also acted as the chair of the event, Fionna Beveridge, University of Liverpool, Johanna Kantola, University of Helsinki, Csilla Kollonay-Lehoczky, CEU and Marian Sawer, Australian National University, discussed the current state of gender equality policies in the EU and particularly the challenges brought to the field by the prevalence of relatively weak implementation patterns and strong presence of soft policy instruments. The vulnerability of the otherwise largely progressive European gender policies was discussed in the context of the economic crises and related shift in policy priorities (see video).

During the conference dinner, Judith Wirth, a leading women’s rights advocate in Hungary delivered a keynote speech. She discussed the status of women in Hungary in the context of the current conservative political turn.

Discussion throughout the conference were grouped into ten sections including altogether 70 panels which covered important topics such as social movements, states and public policy, political representation, violence, war and security, gender and international development, identity and multiculturalism, European and international governance.

The topics flagged in the conference, in the plenary sessions as well as panel discussions, pointed to the challenges and opportunities to be addressed by gender equality scholars and policy makers alike in the next years particularly in the context of rapidly changing Europe.