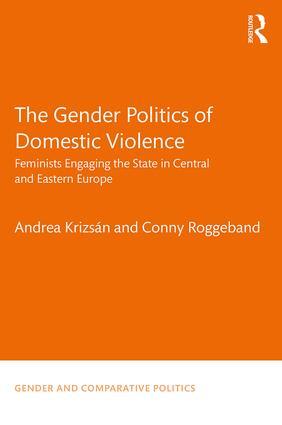 Co-authored by Andrea Krizsan, CEU Center for Policy Studies research fellow and adjunct faculty at the CEU School of Public Policy, and Conny Roggeband from the University of Amsterdam.

What are the factors that shape domestic violence policy change and how are variable gendered meanings produced in these policies? How and when can feminists influence policy making? What conditions and policy mechanisms lead to progressive change and which ones block it or lead to reversal?

The Gender Politics of Domestic Violence analyzes the emergence of gender equality sensitive domestic violence policy reforms in Central and Eastern Europe (CEE). Tracing policy developments in Eastern Europe from the beginning of 2000s, when domestic violence first emerged on policy agendas, until 2015, Andrea Krizsan and Conny Roggeband look into the contestation that takes place between women's movements, states and actors opposing gender equality to explain the differences in gender equality sensitive policy outputs across the region.

They point to regionally specific patterns of feminist engagement with the state in which coalition-building between women's organizations and establishing alliances with different state actors were critical for achieving gendered policy progress. In addition, they demonstrate how discursive contexts shaped by democratization frames and opposition to gender equality, led to differences in the politicization of gender equality, making gender friendly reforms more feasible in some countries than others.