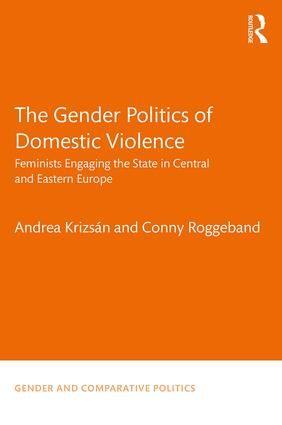 Placing violence against women, including domestic violence, on the global human rights agenda was one of the most impressive successes of the women’s rights movement over the last three decades.

Domestic violence policy is a field of important progress for women’s rights in Central and Eastern Europe (CEE) as well. By 2015, the majority of countries in the region had adopted specific laws and various national policies to prevent and respond to domestic violence. However, differences between countries are pronounced, in whether and how adopted policies respond to the needs of women victims, and address the link between domestic violence and gender inequality, or whether they end up supporting various other policy objectives. Some policies are more favorable to women victims and more conducive to gender equality, while others are less so.  In our book on the development of domestic violence policies in five countries of Central and Eastern Europe we show how differences between these policies can best be understood by analyzing processes surrounding their development and their implementation. National political, institutional and discursive contexts and how these politicize gender equality are critical in the process. International actors and norms also impact the process of policy change through multiple mechanisms of influence. But a common thread that emerges is the critical role of feminist organizing as motor of change. Despite arguments about the weakness of feminist civil society in post-communist countries the book shows several remarkable feminist success stories.

Well-functioning national feminist networks speaking with a unified voice and operating in stable coalitions with different level state actors are key to the emergence of domestic violence policy regimes that are more responsive to gender equality. They embark on various opportunities that emerge within the given national institutional and discursive contexts. They adapt, practice and amplify relevant international norms. Furthermore, policies and policy practices are more resilient if women’s rights actors not only set the policy agenda, but remain part of processes governing these policies. Inclusion of women’s rights advocates in different cooperative and coordinating governance structures, involvement in service provision and prevention activities are policy mechanisms which provide for good policy results. A fundamental aspect of successful feminist activism is cooperation with actors who are insiders to the state, the higher level the better. The support of critical actors within the state is key to policy progress and its resilience over time.

However, recent tendencies of democratic backsliding in several post-communist countries of the region challenge the progress made in combatting domestic violence. We witness patterns of state closure to cooperation with civil society or replacement of previously included rights groups with groups that are closer to the ideology of illiberal governments.

Women’s rights advocates are increasingly excluded from policy processes and their voices are marginalized and neglected. Also, feminist organizations and activists face restrictive legislation to control their activities and repressive actions like disproportionate auditing as a means of control or policing. Such attacks on women’s rights advocacy groups endanger the critical role that such groups can play in safeguarding existing policies.

Where does this leave feminist actors and gender equality policies? A model of cooperation and co-governance that proved to be more or less beneficial according to the analysis of the book is now shaken in its premises. Hostile states become the norm where consultation, cooperation and giving voice are not anymore the rule but rather the exception. While this could inhibit feminist activism it may also serve as an incentive for innovative thinking within feminist groups, for creating new forms of resistance and mobilization. Under these circumstances a turn to grassroots or locally relevant practices, new coalitions with rights groups, or an increase of voluntary work and new forms of crowd sourcing or philanthropy can have potential. As the book argues, women’s movements with diversified capacities turn out to be more viable than those that have strong capacity for institutionalized action but little grassroots potential.

Andrea Krizsan is Research Fellow at the Center for Policy Studies, Central European University, Budapest. Her research focuses on the comparative politics of gender inequality and violence against women and intersectionality in Central and Eastern Europe.

Conny Roggeband lectures at the Department of Political Science at the University of Amsterdam. Her research interests include gender mainstreaming and equality policies, gender-based violence, social movements and transnational feminist networking.