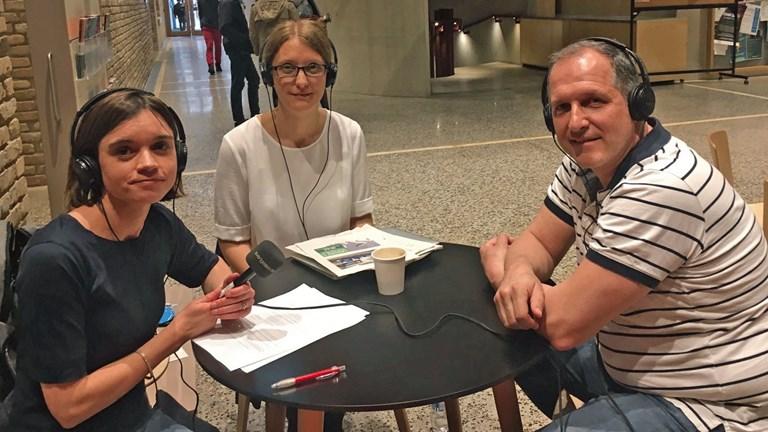 The blog author (in the middle) in a broadcast by the Swedish Radio on April 6, two days before the elections. Photo: Swedish Radio/private

The parliamentary election that took place in Hungary on April 8 was the sixth one I have been a part of. As I am not a Hungarian citizen I could not cast a ballot, but each time - and each time more and more - I took part in discussions with colleagues, friends and acquaintances. As my knowledge of Hungarian improved, I could increasingly catch nuances in political speeches and commentaries, and assess them more comprehensively. The parliamentary election of 2018 was special for many reasons, but one thing that became strikingly clear over the past weeks is that I have never seen such high level of interest from international media.

My life and professional trajectory make me receptive to questions and interest from media. I have a BA degree in journalism and worked for some time for the Swedish Radio - a public broadcaster – in the late 1990s and early 2000s. I always look back to that time with fondness and with pride, and ever since I have always been happy to meet up with journalists visiting Hungary and to respond to occasional requests to be interviewed or participate in studio discussions on topics related to various developments and events in Hungary. Since I embarked on an academic career through the pursuit and acquisition of a PhD degree in Political Science, there has also been the added sense of duty. As a social scientist you are expected to share and disseminate the outcomes of your research, but there are also expectations to help interpret and understand the world around us. For political scientists that often comes down to commenting on the political game of parties and elections.

Given that Sweden is my country of origin and citizenship, and my professional background is in journalism and political science, it is not surprising that requests to interact with media has mostly come from various Swedish radio programs and mostly in connection with political events.  But nothing can be compared with the scope of the inquiries I have had over the past weeks. Already two weeks before the elections Swedish Radio sent no less than three reporters to cover various aspects of the election. In the week running up to the elections I was first contacted by a major Swedish News program and booked for a flight to take part in a live broadcast. While this particular appearance fell through, I participated in pre-election coverage on Swedish Radio, Swedish Television and Finnish radio and gave background information to Norwegian TV and the major Swedish daily newspaper Svenska Dagbladet. On the day of the elections I was live at 16.00, 20.00, 22.05 and 23.00 for Expressen TV (an audiovisual/web channel run by a big tabloid newspaper), Swedish Television and Swedish Radio web broadcasts and was interviewed by Dagens Nyheter, another major daily. In the early morning hours the day after the election I again commented on the same channels and was interviewed again by Finnish radio. Here it should be emphasized that I am of course not the only go-to political analyst for Swedish and Nordic journalists. My assessment on extensive coverage is therefore based on both what I have personally been involved in and the scope of other coverage.

Two questions have been on my mind following this onslaught of interest: what explains this record high interest, and has the way I interact with and participate in media changed compared to previous elections?

For the high interest from Swedish media I have three, partly interrelated, explanations. Firstly, the Hungarian government’s extreme positioning in terms of both rhetoric and policy position does justify an outsized international/European coverage in relation to Hungary’s actual size and regular influence. Second, the focus of the government on migration coincides with what is high on political and media agenda in international media and has very high salience in Sweden, which has a very high per capita immigration ratio. Third, the usage of Sweden as a ‘warning example’ by Hungarian government spokesmen and government-close media resonates well with a strengthening public debates about the image of Sweden, i.e. how Sweden is perceived abroad. A particular trigger was US President Trump’s remark in a speech ‘look at what’s happening last night in Sweden’ (when, in fact, nothing in particular had happened, see this Washington Post article for context). Already a couple of years ago I remember mentioning to journalists that my reception as a Swede in Hungary seems to be slowly changing, from always being seen as representing the welfare utopia to someone coming from a crime-ridden multi-cultural country full of “liberal homosexuals” (the latter is an actual quote by a taxi driver and probably the coarsest of what are usually more subtle remarks). At that time I felt that I was not getting through with my points to the journalists, but by now this has become an issue that can be framed in a way that listeners and viewers will understand and consider important.

Regarding my role, I have to some extent oscillated between being in radio as a journalist and as political scientist. Ten-fifteen years ago when my education and radio experience was fresh I would sometimes be introduced as a ‘freelance journalist’ although I never did active freelancing and very rarely have been paid for any participation (in recent years I never even considered asking since I see the time this takes as part of my job and duty as a social scientist) In ‘journalist mode’ I looked for news angles and what the public would be interest in. Later on, with the status of a PhD student, arrived the expert legitimacy of academia, and I could more easily be introduced as a political scientist, and I tried to structure my answers in more analytically rich ways. However, in both capacities, I could exercise a role that was to a large extent felt by me as ‘neutral’ and also perceived as such. A few years ago that started to change as I came to disagree more strongly on a personal level with much of what the Hungarian government was pursuing. It became more difficult to hide myself between phrases of ‘what the government claims’ and ‘what critics say’. The Lex CEU last year brought this dilemma right up to the surface where it had to be addressed. As a political scientist at CEU  I could no longer just be any commentator – I risked being seen as part of a political struggle, and to avoid bias, news stations would have to be transparent about my affiliation and balance my participation with other voices. In other words, what constructivist streams of social science has emphasized in terms of the importance of positionality  had hit me and made every media contact more and more difficult to tread. In addition, the requirement to be transparent about the situation required mentioning about the CEU situation (summarized here) and George Soros, while not being authorized or having the information to say anything on CEU strategy or decisions since that could come across as speaking on behalf of CEU  which I was in no position to do. How did I manage this balance? Writing this on the day after the elections, with just a few hours of sleep between the last media appearance last night and the first this morning, I can’t really say, and, to some extent I know that is not my task to judge. While I have learned a lot in this process and believe that self-reflection is always good, I can only hope that one day I will go back to being just like any political scientist out there offering analysis. Even more, I hope that there will be no reason for extra coverage of Hungarian elections by the international media.