The recently-released second Roma Civil Monitor (RCM) report on the implementation of Bulgaria’s National Roma Integration Strategy (NRIS) relates that the first RCM report in 2017 was given significant diplomatic and political attention. The process of researching the second report endeavored to develop the capacity of Roma organizations to monitor policy implementation and then to advocate for effective policy both locally and nationally based on the findings. The authors note that Bulgaria’s Roma community and the Roma movement itself are not homogenous, either ethnoculturally or socially, so it is important not to misrepresent findings as if they were a unified Roma voice. 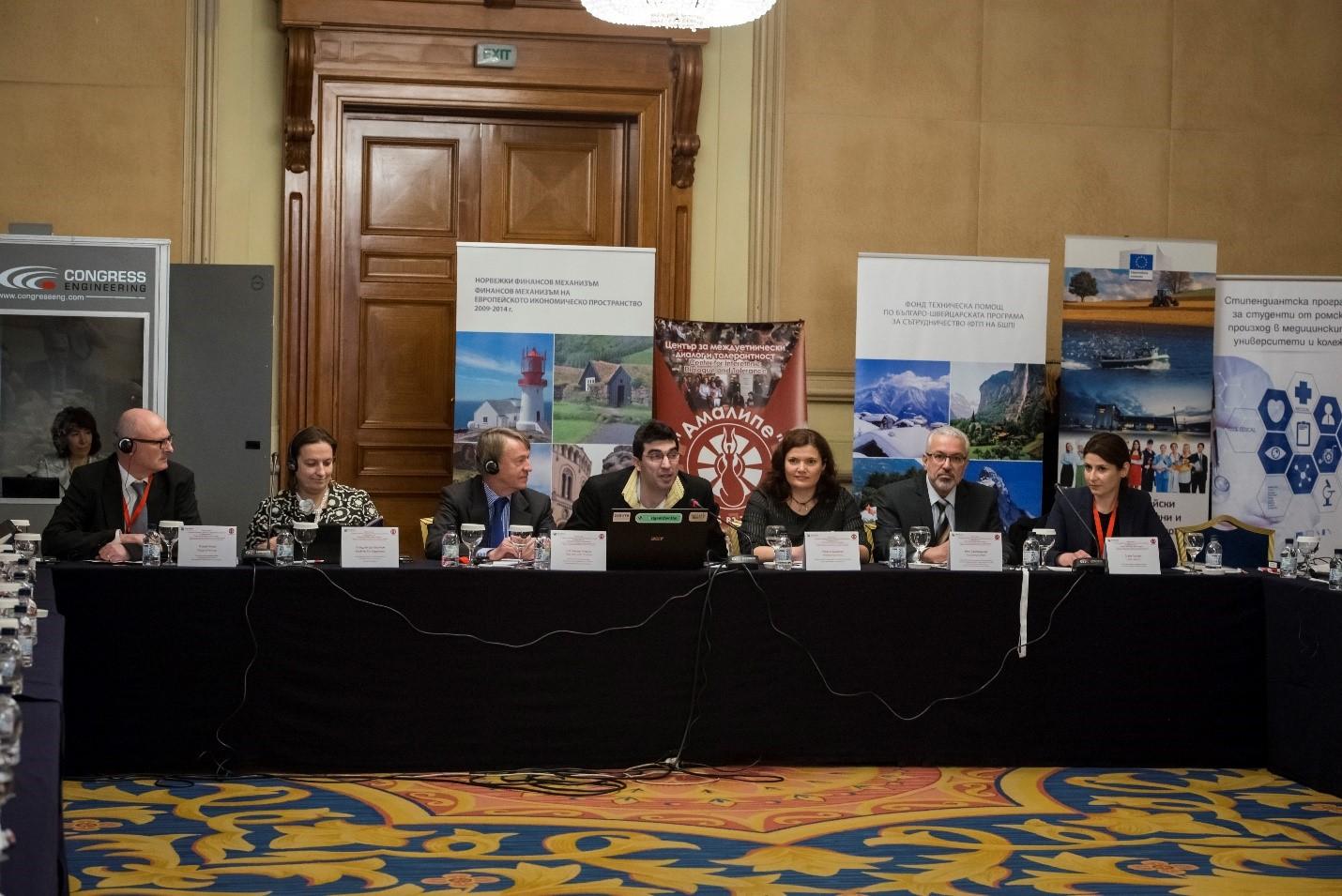 A 2017 advocacy forum organized by Amalipe in Sofia, Bulgaria with the participation of the Ambassador of the Netherlands, European Commission representatives, and Bulgarian Deputy Prime Ministers. Amalipe chair Deyan Kolev is speaking. (PHOTO: Raycho Chaprazov)

“Regarding Roma integration, the 2017-18 period was characterised by the collapse of the legitimacy of the National Roma Contact Point (NRCP) and the consultative process with civil society after an ultra-nationalist was appointed chair of the National Council for Cooperation on Ethnic and Integration Issues,” says Deyan Kolev, the chair of the Amalipe NGO. “The main space for Roma-targeted policy and consultation is regarding the usage of EU funds for Roma inclusion - the European Social Fund especially, and the European Regional Development Fund in part.”

Important improvements have been observed in the field of education, especially in reducing early school leaving and increasing participation in different levels of education, while segregation remains a problem. Deterioration is obvious in the field of housing.  Serious challenges, however, remain in all fields.

Long-term mass Roma unemployment in Bulgaria is the most serious indicator of Roma poverty and is a community-wide problem. Just 23% of economically active Roma are employed – 16% of women and 29% of men. Those Roma who are employed mainly hold low-paid jobs with temporary contracts in agriculture, local services and construction work. Policies and strategies, including at municipal level, do not consider the vulnerable position of Roma women, who often face limitations inside their communities in addition to the multiple discrimination outside their communities that inhibits their chances for civic participation; 32 % of Roma in Bulgaria report having experienced discrimination in employment. However, the report did note that a local organization, the Indi-Roma Social Foundation in Kuklen, has piloted an approach developed by the Czech NGO IQ Roma servis and has introduced an “Ethnically Tolerant Employer Award” for employers who consistently demonstrate such tolerance and focus on supporting persons from disadvantaged ethnicities, with 11 such awards being issued in 2018. The report’s main recommendation about employment is that the Bulgarian authorities must create job opportunities for long-term unemployed persons to be paid a guaranteed minimum wage that can be combined with social benefits to prevent families from falling into extreme poverty and hunger.

When it comes to housing, the report found that Bulgarian Roma report fewer problems with housing quality and environmental factors compared to Roma in the Czech Republic and Portugal, and far fewer Bulgarian Roma say they have problems with crime in their neighborhoods compared to Roma in the Czech Republic and Spain. While impoverished Roma are likely to qualify for the little social housing that exists in Bulgaria, the social housing itself is not sufficient. Like many other Bulgarians living in poverty, the ability to afford heating is an issue for Roma as well. The report found that most Roma live in ghettos in harsh conditions with very limited access to basic infrastructure or basic services such as public transport, garbage collection or water supply, a situation characterized as “critical”. Demolitions of illegally-built homes and evictions remain a problem, with Bulgarian courts not viewing the destruction of housing as different from the destruction of any other kind of structure, although human rights activists have managed to use international law to get national authorities to promise to heed their obligations to provide alternative accommodation to evictees (local officials in one case still did not comply even after the European Court of Human Rights had rendered its judgment, though). Civil society is calling on the authorities to legalize homes that are structurally sound and to modify the rules on how to deal with illegal constructions in order to consider whether they are occupied residences. Doing so could prevent much social disruption.

In terms of healthcare and the Roma community in Bulgaria, the report finds that what is most worrying is that that the Action Plan for the NRIS reveals that the Government is either unaware of or does not intend to face crucial integration issues in this regard. Without providing evidence, Government materials reportedly assert that “genetic diseases” determine Roma health, an allegation that is antigypsyist and discriminatory. Bulgaria generally lacks an addiction prevention policy that would be sustainable, even though the use of illegal drugs is associated with serious issues such as contraction of HIV and vulnerability to human trafficking. The report recommends employing some of Bulgaria’s Roma health mediators regionally in order to conduct preventive health care outreach from that level, as well as nationally standardizing this service. Hospitals and medical centers should also employ Roma health mediators to help prevent communication problems between biased medical personnel and Roma seeking care.

Lastly, when it comes to education, a significant advance has been achieved regarding the enrolment of Roma in primary school and reducing their dropout rate. Nevertheless, significant challenges remain in promoting ethnically mixed, inclusive education and desegregation. Persistent challenges also remain obvious when it comes to improving academic achievement and quality of education. More measures are necessary to increase the number of Roma in secondary education. The report notes that a Bulgarian civil society coalition has been advocating since 2017 for the abolition of kindergarten tuition, an example of pro-Roma and Roma NGOs acting together to achieve change so that marginalized children can access education more easily. Reportedly the coalition has convinced several local governments to stop charging tuition for kindergarten access. The report also discusses the approach taken by the Gabrovo municipality to bring educational segregation on an ethnic basis to an end, including constantly working with non-Roma parents to convince them that Roma children joining a school community will not lead to a decrease in the quality of the education provided there. In this example, as in many of the other areas, it can be seen that prevention is always preferable to allowing problems to develop.