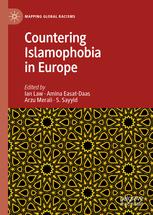 A Palgrave edited volume has been published based on the research conducted in the 'Countering Islamophobia through the Development of Best Practice in the use of Counter-Narratives in EU Member States' project. Editors are Ian Law, Amina Easat-Daas, Arzu Merali and Salman Sayyid, all of them were part of the University of Leeds Team of the project.  The Hungarian chapter is written by CPS researcher Zsuzsanna Vidra.

The treatment of Muslims is the touchstone of contemporary European racism across its many nations and localities. We make a definitive case for two arguments in this book: firstly, the recognition of the accelerating and pervasive nature of Islamophobia in this region; and secondly, recognition that this process is being, can be, and will be challenged by counter-narratives that make the claim for Muslim humanity, plurality, space and justice.

This book draws on new evidence from eight national contexts to provide an innovative kit of counter-narratives, which were presented and well received at the European Parliament in September 2018, and subsequently launched across Europe in national workshops in selected states. A synergy between leading academic researchers and the Islamic Human Rights Commission, Countering Islamophobia in Europe will be of value to EU institutions, governments and policy-makers, NGOs and media organisations, as well as researchers of multiculturalism, Islam, Muslims and immigration.

More details (including order information) is available on the publisher's website.

Countering Islamophobia through the Development of Best Practice in the use of Counter-Narratives in EU Member States (Counter-Islamophobia Kit)
Category:
News
Project Events & News
Publications