The recently-released second Roma Civil Monitor (RCM) report has reviewed the impact of French Government’s implementation of policies on both the "Gens du voyage”, who may be French citizens, and the citizens from Bulgaria and Romania who end up squatting throughout the country and are thus perceived as “Roma migrants” (“EU-mobile Roma”). The report has found that the housing conditions in which many members of both groups live are a source of serious difficulties that impact their access to education, employment, and health care. While the adoption of the EU Framework on Roma Integration made it possible for EU funds to be drawn on for the policies that impact both groups, they have not been used enough by the French state, both because of a lack of political will but also because accessing them is a complex undertaking. 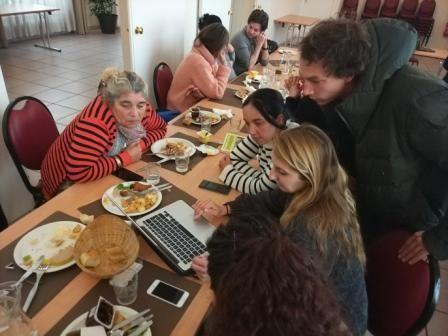 Members of the "Collectif des femmes d'Hellemmes", a group fighting against environmental injustice done to their local community, at a civil society training in Saint-Denis in 2018, looking at archival documents that Lise Foisneau, historian, found about their family in archives. (PHOTO: Saimir Mile)

“When it comes to social integration policies, the worst thing is not targeting ethnic categories through such policies, nor is it taking a ‘colour-blind’ approach,” says Saimir Mile of La voix des Rroms (“The Romani Voice”). “The worst thing for our society is to ethnicize those who are socioeconomically excluded because of antigypsyism, while simultaneously being indifferent towards Rromani identities as they actually exist and evolve in and through those who so identify. That worst-case scenario permanently consolidates antigypsyism and the particular social exclusion that it causes."

The particular health issues experienced by members of these minorities correspond to their living conditions and lack of access to health care. For years, NGOs such as Doctors of the World have regularly reported the connection between the recurrent evictions of members of these minorities in France and the negative impact of such precarity on health. Low levels of education are also a factor in members of these communities not approaching health services except in cases of emergency, or approaching them only at advanced stages of illness, including with respect to prenatal health care.

The report summarizes how all citizens of Bulgaria and Romania living in France have had to wait for certain labour market restrictions to be lifted in order to access regular employment there. Many such citizens of Romani origin have ended up being subject to deportation orders because of their resulting financial insecurity.

As for the “Gens du voyage”, France’s equality body has reported that they have long been victims of both direct and indirect discrimination on the labour market because of the stigma associated with the identification documents they have been required by the state to carry until very recently (“carnet de circulation” – a special identity document for persons without permanent residence). People without a fixed residence were previously required to show this to local police at a regular frequency (up to every three months). It was not until 2017 that this obligation and other related requirements were finally abolished by law.

La voix des Rroms (“The Romani Voice”), which compiled the RCM report, recommends that the French state’s employment centres should be more proactive in their support for persons living in precarity, who often have to relocate frequently because of evictions. Public authorities should also prioritize making sure that access to the employment opportunities they advertise is guaranteed to all on an equal basis in practice. Both local and state authorities should ensure there is a role for the beneficiaries of integration projects to play in their design and follow-up, taking a more participatory approach and paying particular attention to beneficiaries’ active involvement and autonomy. Local authorities should also make it a priority, when deciding on whether to undertake evictions, to make sure the potential for epidemics and other adverse health outcomes is not exacerbated by rendering the evictees homeless. Last but not least, education authorities at the national level should undergo sensitivity training with respect to the barriers encountered by different minorities when accessing education so they can more effectively bring minority children into the public education system.