The second Roma Civil Monitor (RCM) report on Slovenia has found that Roma unemployment is extremely high, between 90 and 98 percent. Roma are also severely excluded from accessing housing, a fact that generates their further marginalization in other areas. While Roma have the same right to access healthcare as others in Slovenia, they do not always use those rights, and their overall social exclusion hinders their access to care. Last but not least, Roma children’s low rates of school attendance and success in Slovenia negatively impact both their health and their life opportunities as adults. 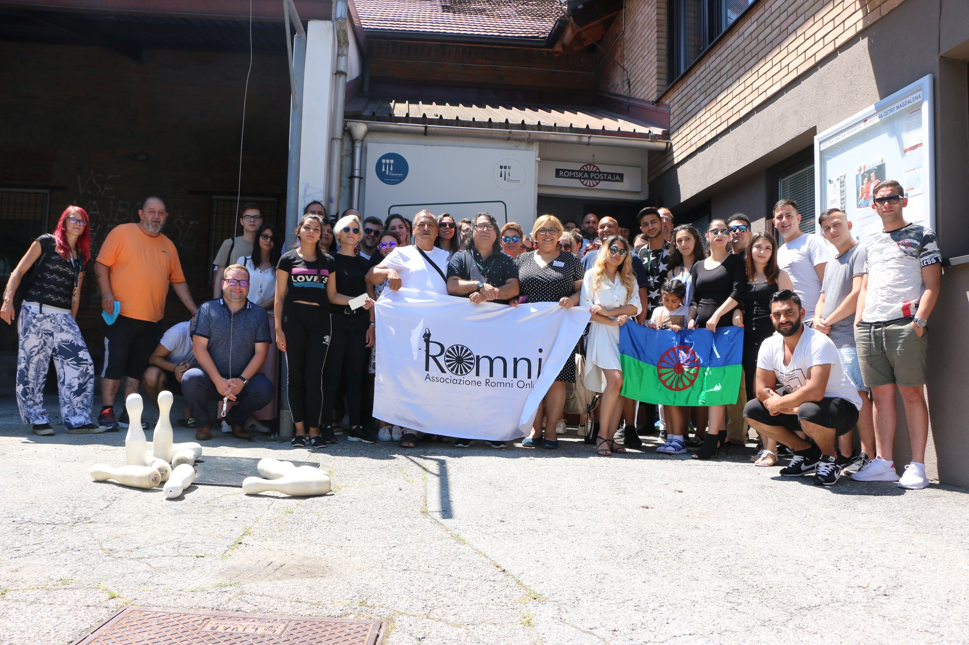 Members of the international Roma community and the public in Slovenia at the “European Youth against Antigypsyism” conference held on 10 June 2019 by EPEKA (the Scientific and Research Association for Art, Cultural and Educational Programmes and Technology). (PHOTO:  Jerica Lorenci).

“Slovenia will soon issue a new Roma Education Strategy which, among other new or updated measures, will systemize the post of Roma school assistant,” said Maja Skalar, an independent researcher from Slovenia who has been involved in coordinating the research. The educational achievement of Roma in Slovenia is very low: a 2003 survey by the country’s Employment Service revealed that 98.2 per cent of the unemployed Roma in Dolenjska and 90 per cent of those in Prekmurje never completed primary education. No more recent studies on this issue were found by the RCM researchers. NGOs also point out that the issue of early and forced marriages is associated with educational achievement as well, since Romani girls’ educational careers in Slovenia often end when they marry early. A 2014 study done by the Institute of Social Protection of the Republic of Slovenia found the extent of child and forced marriage in Slovenia is far from negligible. The NGOs’ opinion is that while the Government organises conferences about this issue, nothing is being done about it in reality – there are no prevention programs, especially in the Dolenjska region, where this reportedly happens more often. One way the Government has addressed the issue is that in June 2017, the Community of the Centres for Social Work of Slovenia prepared written guidelines and recommendations for the work of Child Social Welfare professionals on cases of minors in harmful environments.

Slovenia’s active employment policy includes measures in which Roma have been increasingly involved in recent years. In 2017, 3,264 Roma were said to have been included in such measures. However, since there could be as many as 12,000 Roma in the country, and since joblessness is so severe in the Roma community, these participation numbers are extremely low, as the Council of Europe noted in a 2018 report. Some previously Roma-targeted measures have failed to achieve results, such as the Roma Employment Centre, established in 2006, which had to be closed in 2016 after failing to achieve any employment of Roma. The European Commission against Racism and Intolerance (ECRI) reported that between 2006 and 2010, Slovenia’s Labour Inspectorate received just 45 complaints about discrimination, most on grounds of age or gender, with ethnic origin rarely reported as a ground. ECRI found that the low reporting numbers were either due to fear of retaliation or because workers do not understand what discrimination is, even though both discrimination and retaliation are prohibited by law.

The UN Independent Expert on the Issue of Human Rights Obligations related to Access to Safe Drinking Water and Sanitation, the Human Rights Commissioner of the Council of Europe, ECRI, the UN Special Rapporteur on minority issues, Amnesty International, and Slovenia’s own Ombudsman have all confirmed that the exclusion of Roma from housing in Slovenia is extreme. In the southeast, some 20 - 30 per cent of Roma settlements have no access to water and 40 per cent have no access to electricity. This leads to practices such as those in the Dobruška vas settlement, where the inhabitants have no choice but to draw water from a polluted stream, which was criticized by the Human Rights Commissioner of the Council of Europe after a March 2017 visit. The National Programme of Measures 2017-2021 does include the goal of improving the housing situation of Roma, but the NGO view is that its measures exist on paper only. Similar conclusions were reported by the Peace Institute in its 2018 annual evaluation of the implementation of the National Programme of Measures 2017-2021. One promising practice is an agreement to finance and implement the spatial-planning arrangement of the Roma settlement called Žabjak-Brezje, a project of the Novo mesto municipality. The project is currently being implemented and will be completed in 2020 with a budget of EUR 3.65 million, with the state contributing EUR 3.1 million.

Civil society is recommending that Slovenia make more subsidies available to employers who hire Roma. They are also recommending revising the minimum wage and social assistance system so that disincentives to employment no longer exist. Municipalities should be pressured to include Roma settlements in their territorial plans and to fulfil their legal obligations towards Roma communities, including in terms of investment. It should be compulsory for municipalities to publish calls for non-profit housing during a set period of time and to make sure the criteria for being allocated non-profit housing are not discriminatory and that everybody who applies for such housing is treated equally with respect to assessing their eligibility. Based on the promising practice of Roma assistants in preschools and primary schools, such assistants should be employed by all preschools, primary and secondary schools attended by Roma children. The position of Roma health care assistants should also be introduced based on the current model being used in the schools. Health care professionals must receive more training on how to work with Roma community members. Lastly but by no means least, the issue of arranged, early and forced marriages in Roma communities should be addressed more effectively.