The Roma Civil Monitor (RCM) report for Italy has found that there is no accurate data available at the national level about the number of Roma, Sinit and Caminanti (RSC) in the country. The Government approved its National Roma Integration Strategy (NRIS) after it was drafted by the National Office against Racial Discrimination (UNAR) in collaboration with civil society and RSC representatives. According to the RCM report, many problems persist with implementing the national strategy, problems that apparently require a radical change of direction if they are to be resolved. Many stereotypes about RSC people persist and continue to influence policy and its implementation locally and nationally. 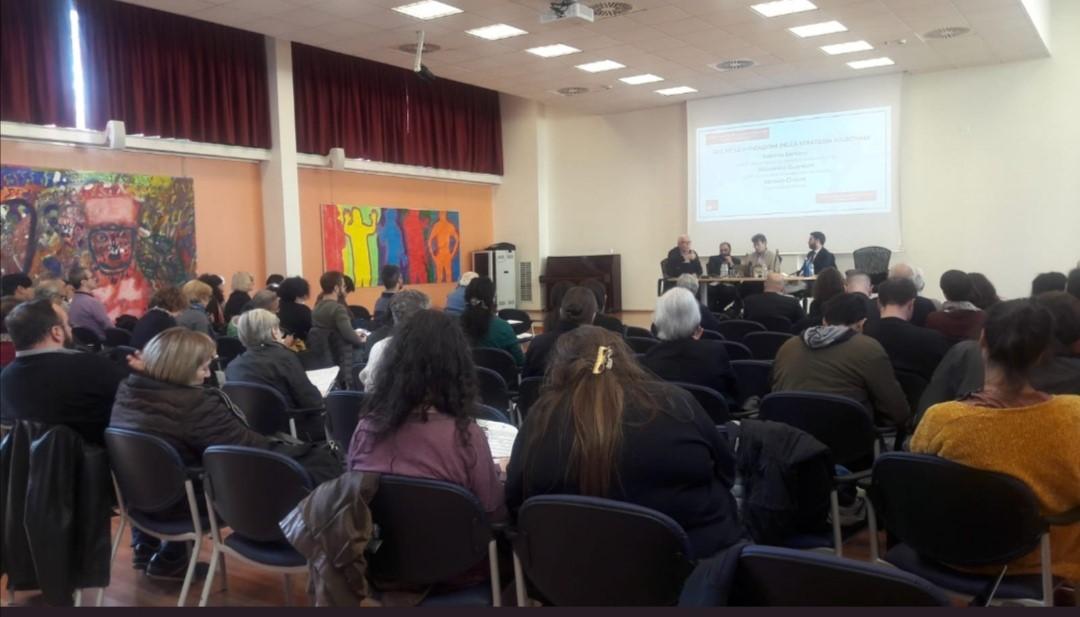 From left to right onstage: Nazzareno Guarnieri (Fondazione Romani), Antonio Ciniero (Consorzio Nova) and Roberto Bortone (UNAR) discuss the analysis of the implementation of the National Roma Integration Strategy promoted by the first Roma Civil Monitor report at the Casa della Carità in Milan from 10-11 October 2019.

The report reviews the criminalizing approach that was taken toward RSC people when theItalian Government declared its “Nomad Emergency” in 2008, a state of affairs that persisted until 2011 when that policy was finally declared illegitimate. Criminalization of the RSC population is nothing new in Italy. While people speaking the Romanes language have been living on what is today Italian territory since the year 1400, despite that longevity and the fact that they are estimated to represent the country’s third-largest minority, RSC representatives have been deliberately excluded from legislative debates about them, including the one that eventually led to the adoption of a law recognizing “historical linguistic minorities” back in 1999. They are not officially recognized as a minority in Italy at all.

One member of the current coalition Government of Italy, the  “Lega” (League) party, is a re-named version of what was once the “Lega Nord” (Northern League), a party whose members have been convicted of inciting racial hatred who were instrumental in advocating for the “Nomad Emergency” policy to criminalize the RSC community. One Lega Nord candidate was convicted of incitement after saying in 2013 that he wanted to “eliminate all Gypsy children”, a case that was much-discussed nationally.

As far as the development of the NRIS is concerned, the civil society report finds that the formalistic involvement of RSC representatives during consultations on the strategy revealed that empowerment and participation remain problematic for the RSC in Italy. Two national level Working Groups are active, one that is working to bridge the information gap about the living conditions of RSC communities, and the other working on the legal situation of RSC community members who have been rendered stateless.

Few regions have undertaken initiatives aligned with the NRIS objectives on access to housing by RSC community members. Emilia Romagna Region has adopted a special law to finance the transition of RSC citizens living in camps to living in homes integrated into urban areas or what are called “micro-residential” areas. Tuscany’s approval in 2018 of a protocol for interventions aimed at resolving the existence of Roma camps and the inclusion of vulnerable persons living on that regional territory also appears to be aligned with the NRIS. The empowerment of the RSC community has been touched on by a project called “Housing First and Community Development: Community Welfare Project” for RSC families living in the city of Faenza(Emilia-Romagna Reiong) that was launched in 2015 by local social services in collaboration with the Fondazione Romanì NGO.

“Despite isolated progress in some regions, such as Emilia Romagna, many problems still persist with the NRIS implementation, and it appears they will be difficult to resolve without a radical change of direction,” says Donatella DeVito of Casa della Carità. “The limited powers the UNAR has to ensure the implementation of the NRIS at local level, together with poor capacity to coordinate actions among the different institutional levels, has negatively impacted thedevelopment of Local Action Plans for RSC inclusion. According to current legislation, at local level everything is left to the discretion of local institutions that have the powers to decide whether and how to adopt measures implementing the strategy. As a result of that, just 11 Regions out of 20 have set up the consultative meetings aimed at agreeing on how to implement the NRIS at local level, and only the Emilia Romagna Region has promoted and approved a regional law aimed at closing the Roma municipal camps and taking actions aimed at supporting RSC inclusion. Moreover, there are several regional and local authorities that not only are not implementing the NRIS but are even denying it exists and persisting in mono-ethnic residential areas and camps or even opening new ones. The delay in the implementation of the NRIS in the two regions where the RSC presence (and also their exclusion) is higher, such as Lazio and Lombardy, is particularly significant. In Lazio, the regional consultations did not start until 2015, while in Lombardy they have not even been organized yet.”

The civil society report recommends that Italy develop a monitoring and evaluation system for the NRIS and identify clear, measurable indicators for assessing the achievement of NRIS targets as well as any unanticipated effects, whether negative or positive, of the implementation of the strategy. It also recommends the Government build a local network of Working Groups including RSC community members through the UNAR to work on issues of discrimination. Last but not least, the report recommends investing in the promotion of RSC culture and focusing on long-term counter-narrative campaigns to combat antigypsyism, as has also been suggested by the Council of Europe.