The second Roma Civil Monitor (RCM) report for Estonia has found that Roma community representatives say some members of the community are living in substandard conditions. In terms of demographics, 40 per cent of Roma in Estonia are Estonian citizens, 38 per cent are Latvian citizens, 14 per cent are Russian citizens and 7 per cent are stateless. The country’s Roma Integration Council was established in 2015 by the Culture Ministry and has 11 members, nine representing local governments and ministries and two members representing the Roma community. While Roma can access public services like all other residents, no specific measures have been developed to target their communities with information.

“It’s good to see that after the report was published, the Government opened a public call to find a mentor for the Roma community,” says Egert Rünne, Director of Estonian Human Rights Centre. “The purpose of the mentor's work is to support Roma integration, including raising the Roma community's awareness of their rights and responsibilities. Also, the work includes improving the capacity of the public sector to safeguard Roma rights and overcome cultural differences. Its a step forward toward realizing the long-awaited dream of opening a Roma support centre.”

Estonia’s Unemployment Insurance Fund has justified not targeting Roma by explaining that all labour market services are already provided based on individual needs. Those Roma community representatives interviewed for the RCM report said Roma are reluctant to approach the fund for assistance because they fear interacting with the bureaucracy and experiencing discriminatory attitudes. For that reason, the Roma community would benefit from support targeting their community and delivered by Roma representatives. A study from 2014 found that 100 % of Roma youth respondents reported having perceived employers as being afraid of them because of their ethnicity. 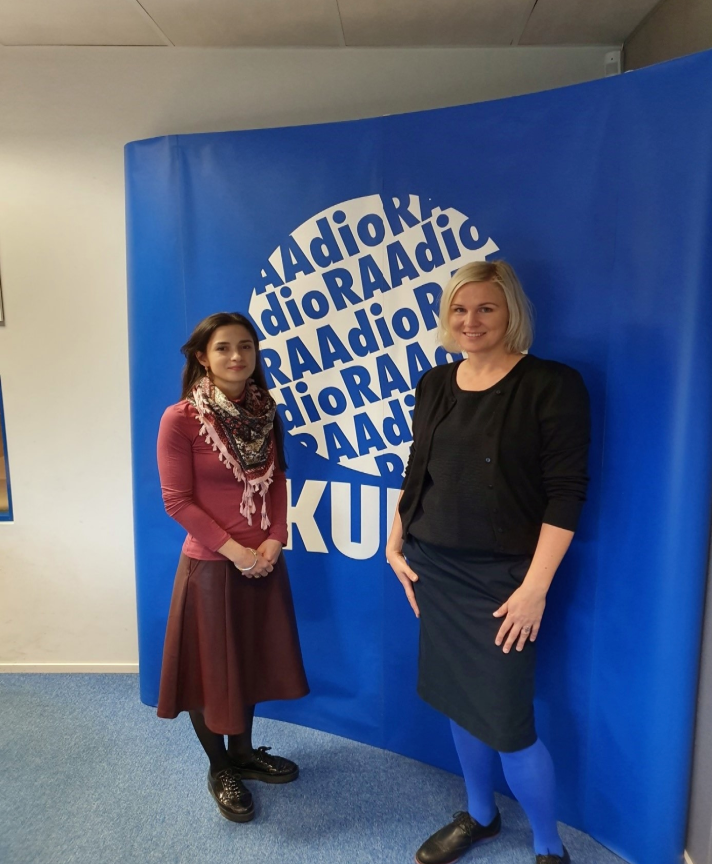 Romani community member Zalina Dabla (left) and reporter Mari Roonema (right) at Radio Kuku for an interview on 9 October 2019 about the situation of Roma in Estonia; journalists reached out to the community after the Roma Civil Monitor report was published.
(PHOTO: Estonian Human Rights Centre)

The Chancellor of Justice in Estonia is charged with verifying allegations of discrimination and settling disputes, including through conciliation procedures that require both parties’ consent. There is no information available whether any cases of work-related discrimination against the Roma have been brought to the attention of the Chancellor of Justice or the Office of the Gender Equality and Equal Treatment Commissioner.

The Roma community in Valga, near the Latvian border, is the largest in the country, and most of the Roma there emigrated to Estonia from Latvia. Representatives of the Roma community interviewed there for the RCM report said there have been issues with the availability of social housing in Valga and that often the social housing that is available is not suitable for families. A previous small-scale study in 2013 found that some Roma have no access to either electricity or running water.

Registration with the Unemployment Insurance Fund described above would also entitle Roma who are unemployed to health insurance and access to free general medical care. According to a report from 2018, about 6 per cent of Estonian residents do not have health insurance. There are no statistics available about how many Roma are insured, but Roma community representatives interviewed said lack of health insurance is indeed a problem in the Roma community.

Civil society recommends opening a Roma-staffed support centre to help Roma unemployed persons access labour market services; that research be conducted on why Roma face challenges in accessing housing; that data be collected on the Roma community’s access to health care; and that teachers be specifically trained for working with Roma students.