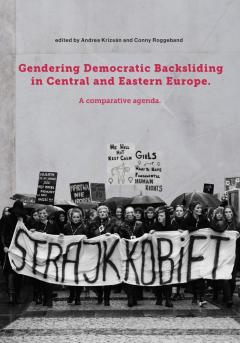 "Gendering Democratic Backsliding in Central and Eastern Europe is a must-read for anyone interested in contemporary dynamics of illiberal democracies and reconfiguration of gender regimes. The theoretical introduction by Andrea Krizsán and Conny Roggeband displays great clarity and provides a neat structure for the whole volume. The book collects thick, but well nuanced and insightful analysis of recent developments of four CEE countries: Croatia, Hungary, Poland, and Romania. The case studies are fascinating, impressive for their richness, but thanks to the common analytical framework, the volume is consistent and accessible. The book is timely and essential for better understanding of what is happening to our democracies, gender policies and feminist movements."

"So far we missed analysis of gender – state – civil society relations under the process of de-democratization. "Gendering Democratic Backsliding in Central and Eastern Europe" by Krizsán and Roggeband fills this gap with constructing a careful theoretical framework that is coherently applied by their co-authors to country case studies covering Croatia, Hungary, Poland and Romania. Authors of the book present the regression and reversal of gender equality policies and the changing landscape of women's activism in such novel circumstances. A must read to all who are concerned about the future of gender equality and women's activism in the region."

Introduction: Mapping the Gendered Implications of  Democratic Backsliding in the Countries of the CEE Region
Andrea Krizsan and Conny Roggeband

The Challenge to Gender Democracy
Conny Roggeband and Andrea Krizsan