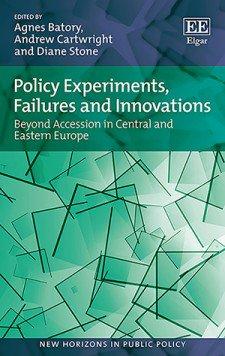 Policy Experiments, Failures and Innovations takes a policy studies perspective in considering post-communist EU member states’ experiences since accession. The book analyses policy transfer processes and expands the new and growing sub-field of policy failure by interrogating the binary ideas of ‘failure’ and ‘success’ in the context of the Central Eastern European (CEE) transition, democratic consolidation and European Union membership.

Contributions consider the extent to which external models have had real traction in the political economies and societies of the CEE countries. The book also considers the ways external models were adapted, transformed or sometimes abandoned in response to unexpected difficulties in implementation. It provides critical analysis of the setbacks, real or perceived policy failures, as well as innovations and unexpected outcomes in a number of important policy areas in the ‘new’ member states of the EU.

This book will be of interest to policy studies scholars and European Union/European studies scholars. It is also relevant for students of European politics as well as general public policy degree courses at undergraduate and graduate level.

Blog: Is the EU Policy Project Failing?
Blog: Projects, Plans and Policies - how can innovative thinking be used to implement policy
Policy Experiments, Failures and Innovations. Beyond Accession in Central and Eastern Europe