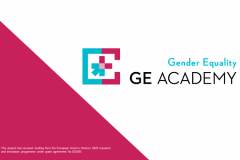 The general goal of the GE Academy project is to develop and implement a coherent and high-quality capacity-building programme on gender equality (GE) in research and innovation (R&I) as well as in Higher Education (HE). GE Academy will develop and provide a series of comprehensive training formats and tailor-made training materials for trainers, practitioners and researchers, making these available to the widest possible audience in Europe and beyond. The GE Academy, with its full capacity-building programme including different training formats (Train-the-Trainers, physical trainings and interactive workshops, Summer Schools, webinars, online Distributed Open Collaborative Courses), will be built and executed in at least 15 countries.

Through its ambitious setup, the project aims at filling a gap in the current EU research landscape, marked by ongoing gender inequality in research organisations, the gender dimension of R&I being ignored or under-addressed, whereas needs in terms of gender awareness and capacity are recognised, but efforts to remedy the situation are still fragmented. The project will respond to the needs of those who contribute to and are involved in institutional change towards gender equality in R&I as well as in HE. The GE Academy will both tackle issues of gender equality in research institutions and research teams through structural change and address the gender dimension of research contents, following the three main ERA objectives for gender equality in research. At the same time, a pan-European network of gender trainers will be established, trained, coached and upskilled for delivering gender training sessions to R&I and HE communities in Europe and beyond. Throughout the project’s lifetime, attention will be paid to seeking modalities and solutions for ensuring the sustainability of the GE Academy project beyond the EU funding period.

This project has received funding from the European Union's Horizon 2020 research and innovation programme under grant agreement No 824585. This communication reflects the views only of the CPS and the Research Executive Agency cannot be held responsible for any use that may be made of the information contained therein.

Supporting the Promotion of Equality in Research and Academia (SUPERA)