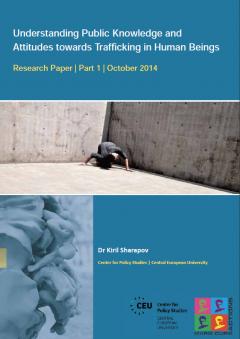 Despite Europe being a major thoroughfare for human trafficking and exploited labour that enables many European consumers to live ‘the good life’, research presented in this paper shows that many citizens do not understand human trafficking, nor do they see it as a problem in their everyday lives. Over the last decade, human trafficking has become a policy priority for governments in all European countries, for non-governmental organizations that provide services to victims of trafficking, and for researchers attempting to assess its magnitude. However, little is still known about how many people are trafficked into and exploited within Europe, and how many people are exploited across national economies without being trafficked in the first place. Little is also known about public understanding of human trafficking and public attitudes towards this phenomenon.

This study addresses a gap in knowledge in this field and highlights differences in the levels of awareness of human trafficking among the general public in Great Britain, Ukraine, and Hungary. It relies on representative surveys of public understanding and attitudes towards human trafficking in these countries, which represent one of the many trafficking routes from Eastern into Central and Western Europe. The surveys were completed between December 2013 and January 2014.