Blog: Backsliding in the European Union 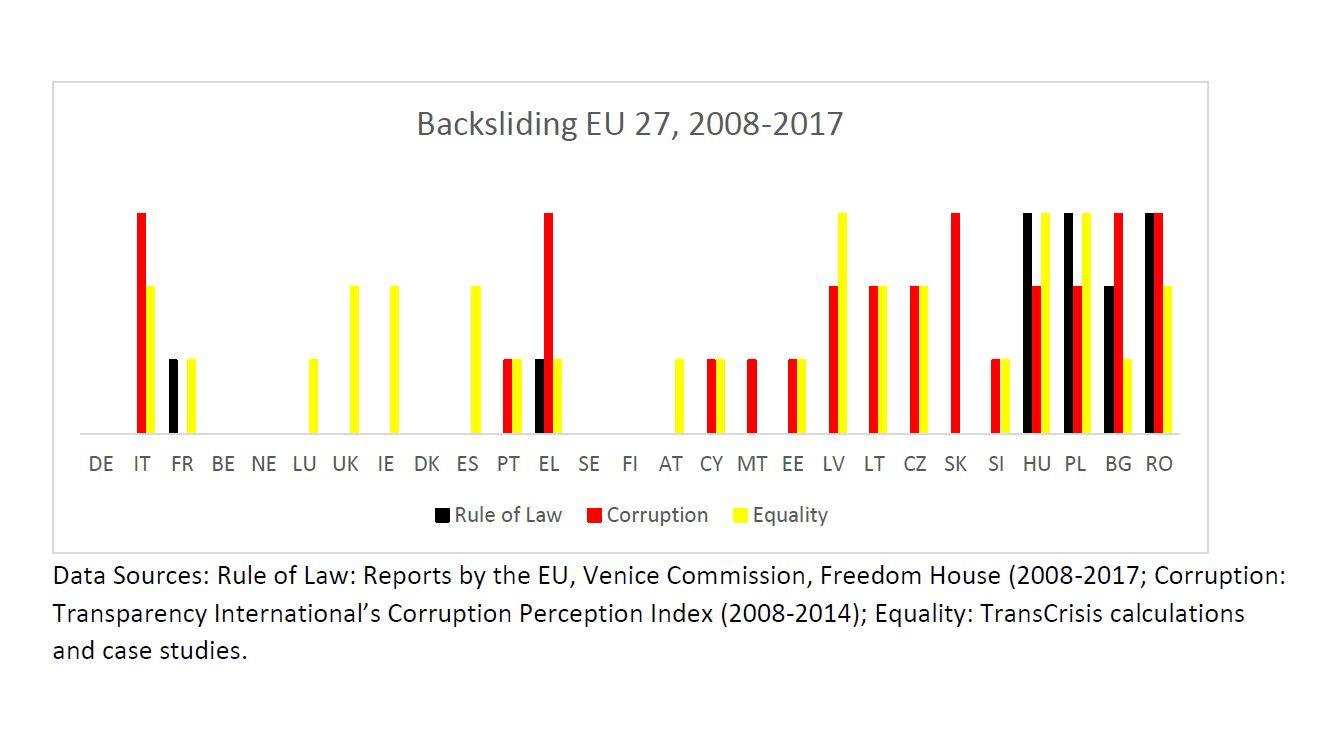 On 9 March 2018 the prime ministers of the three Baltic states announced that they would not back any attempt to censure Poland over democratic backsliding. Coming on top of Hungarian assurances that Budapest would veto any attempt to sanction Warsaw under Article 7 of the Treaty on European Union, and the Bulgarian government’s concern that a move against Poland would cause ‘sleepless nights’ in Sofia, this meant that the Polish government could rest easy. Under Article 7, the Council would need 22 votes simply to determine that there is a ‘clear risk of a serious breach’ of the rule of law. Given Bucharest and Zagreb’s hostility to EU action on backsliding, this take the count well past the break-even point. In Warsaw, Budapest and Sofia (which currently holds the rotating Presidency of the Council) this might look like a crisis averted. But for the EU it could be the beginning of a bigger crisis over how to handle backsliding.

Since Fidesz won power in Hungary 2010, re-wrote the constitution and concentrated power in the hands of Viktor Orbán, democratic backsliding has become a big question in the EU. How far the can a member state be allowed to go back on the commitments it signed up when it joined the EU? Until Jarosław Kaczyński’s Law and Justice party won power in late 2015, the answer seemed to be ‘quite far’. With the European People’s Party reluctant to criticise one of its members, Orbán had considerable room for manoeuvre. But the Poles defied the EU openly. As prime minster Beata Szydło put it in November 2016: compliance with the Commission’s rule of law recommendation was ‘incompatible with the interests of the Polish state’. A year later the Commission lost patience, and invoked Article 7.

But what is backsliding, and how widespread is it? The TransCrisis project answers this question by defining and mapping backsliding in the EU. The academic literature on backsliding is still developing, but three themes stand out: backslidings as a reversal of democratization; backsliding as oligarchic state capture; and backsliding as ‘bad governance’. In the EU context, backsliding could be defined member state policies that contravene the EU’s fundamental laws and values. Even limiting this to policies that violate the values set out in Article 2, it is clear that backsliding involves a broader set of problems than Kaczyński and Orbán’s ‘illiberal democracy’ projects.

The chart at the top provides a simplified snapshot of backsliding in the decade following the financial crisis in three different domains: the rule of law, corruption and social equality policy. The member states are arranged by date of accession to the EU. Low bars indicate some problems related to backsliding (or in the case of corruption, long-term inability to live up to corruption control expectations); medium height bars indicate a degree of backsliding; and high bars indicate substantial backsliding. The chart does not capture change over time, but all the data and time-series are available in two TransCrisis policy briefings: one on mapping backsliding up to 2015, and one on case studies carried out in 2016 and early 2017.

Continue reading at the TransCrisis blog.