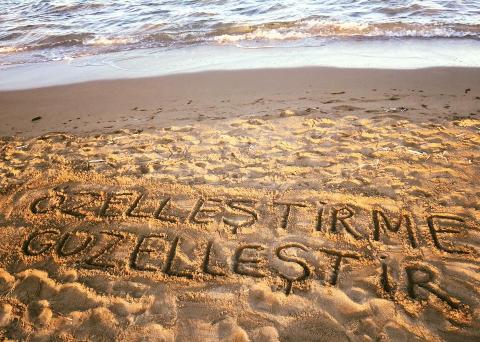 For the past few years, the coastal region of Kyrenia in northern Cyprus has developed unevenly and with an outright favoring of private investors, a trend not uncommon to the rest of the Global South.

Photo: "Sea for Free" activists wrote on a beach during one of their protests "Don't privatize, make the beaches beautiful". Source: Belese Deniz - Sea for Free Facebook Page.

The once-publically accessible northern seashores are now home to towering hotel blocks, resorts, and private beaches, which some Cypriots liken to their own “great wall of China”. The concrete wall-like appearance of the northern landscape below the mountain ranges of Pentadaktylos (Besparmak) is due to rapid and uneven development of the urban landscape and a growing tourism sector that does not prioritize either the preservation of the coastal environment or public access of these coastal spaces over the past decade or so, mainly by Turkish tourism investors. In fact, the lack of an Urban Master Plan, which was only put into force in January 2018 for Kyrenia-Catalkoy region stretching across the coast together with a law passed in 1989 enable gratuitous rulings and reinforce nepotistic relations between political actors and private enterprise along the sealine.

The Law 55/89 recognizes the lack of a Master Plan and enables the Urban Planning office under the Ministry of Tourism and Environment to issue  “special development plan decrees” (ozel imar emri or commonly known as emirname). These decrees formalize the amendment of zoning and planning of the region and have become the framework in which the market/state alliance in Turkish Republic of Northern Cyprus (TRNC) can operate easily so as to fast-track any profit-seeking developer’s project. For instance, a special decree was issued in 2016 for amending the allowed height and floor regulations, tailored specifically for a hotel development project. The decree first enabled the developer to build two extra floors, which was later on, legally contested by a community organizing group called Kyrenia Initiative. In the end, the group won the court case and the two extra floors were demolished. Today, the hotel along with a casino facility fully functions during the summer.

Having turned into the hub of luxury tourism and gambling resorts mainly catering to Turkish weekender tourists, Kyrenia had already been tackling with overpopulation and with insufficient infrastructure especially after the failed Annan Plan in 2004, which was the closest the de-facto Turkish Republic of Northern Cyprus (TRNC) and Republic of Cyprus (RoC) came to a peaceful negotiation since the partition of the island in 1974. With the failure of the Annan Plan after a double referenda process on both sides of the island, the north of Cyprus under the administration of the de-facto TRNC state has undergone a construction boom since the failed Plan meant the prolongation of the status quo of partition of the island, occupation of the north and further dependence of the north’s economy on the Turkish capital.

And since 2016, the topic of tourism development has gained traction thanks to grassroots movements that contest the concretization of the coastline both by conducting activism on these beaches every summer and on the level of legal action. One of these community-led groups is “Sea for Free: the beaches are for the people”, which appeared on social media in 2015 when members of other activist groups and cultural organizations, mostly young Turkish Cypriots, came together in defense of their right to the coastal landscape and free entrance into these public spaces. As a creative act of protest, every summer the members of Sea for Free go in groups to several beaches with a copy of the TRNC constitution and demand the private facility to let them enter for free (Figure 1). Sea for Free activists contend that the expensive fees to enter into public spaces are illegal and at every beach they go to, they remind the facility owners of the constitutional right of citizens to be able to access the coastal strip that “cannot be hindered by anyone or be subjected to any entrance fee.”  Not only this, the members of Sea for Free have also taken up their cause to the legal courts and sued a hotel that did not let them access the beach and eventually won the court case. Sea for Free representatives have been active in raising awareness on the issue of private beaches and calling the rest of northern Cypriot communities to either join them in their beach protests or to replicate what they deem to be an exemplary act. Recently, their calls also have been heard even from the mainland Turkey. People in Cesme in Izmir province and Bodrum in Mugla province—two coastal towns that attract a lot of local and international summer tourism—have followed suit and attempted to enter similar privatized beaches in their localities.

The case of the enclosure of the coastal landscapes can also be traced to the south of the island—to the western Akamas peninsula, a Natura 2000 site. This time, environmental activists in the south have been contending with a massive development project that includes a luxury hotel, an 18-hole golf course, villas, leisure facilities, bike routes and a museum. The Limni bay, where the project was foreseen to be built, is a nesting area for the endangered Mediterranean Loggerhead sea turtle along with the Green turtle species. The Limni project has now come to a halt since the European Commission launched an infringement case again RoC due to complaints about the endangerment of the nesting turtles and failure of nature conservation in the Akamas peninsula.

Looking at another coastal region of the island on the east: Varosha, Famagusta, militarily occupied by the Turkish Armed Forces for more than 40 years, was once the Eastern Mediterranean Riviera; now it is a ghost town. The Turkish military, for the first time in the summer of 2018, opened the doors to this no man’s land for accessing the “Deryneia public beach” by signing a protocol with the Famagusta Municipality of the north. But the beach certainly was not for all public—it is solely for Turkish Cypriot and Turkish citizens. The military checkpoint set up by the Turkish Armed Forces claim your identification card as you enter the derelict Varosha, untouched since the occupation. The old buildings of hotels and houses are now taken over by nature. The babutsa trees—an endemic cactus species—create an ecological network throughout the designated road that leads to the beach.

The Deryneia beach is deemed by many as “the racist beach” or “the beach of shame” today and activist groups, community organizations and the like call for boycotting the beach. The stark contrast between the Kyrenia coastline and Varosha, Famagusta however, might come to an end as the Turkish Cypriot Council of Ministers recently announced that the TRNC authorities will start feasibility research to open Varosha to civil resettlement. Alluding back to what Varosha once was—a tourism hub where world-famous celebrities would flock to vacation, the de-facto Prime Minister of TRNC promises that Varosha will once again be “the Las Vegas of the Middle East, but under Turkish administration this time.”

As the peace negotiations between the de-facto TRNC and the EU-member state RoC fail time and again, the island remains a geopolitical stalemate and the islanders—Turkish Cypriot, Greek Cypriot, Maronite, Turkish settler, and other communities—are left with conflict-laden pasts and uncertain futures. The coastal lands of Cyprus, some privately enclosed and others militarily occupied, transform into pawns in a puzzle for rent-seekers and both de-facto and de-jure polities. For Cypriots, an everyday social activity of going to the beach becomes one of the most politically and morally charged controversies. People like Sea for Free activists, Greek Cypriot environmental activists, others who boycott the Deryneia beach, and locals who hear the calls to protest and boycott are left with many political decisions to make every day during the summer months.