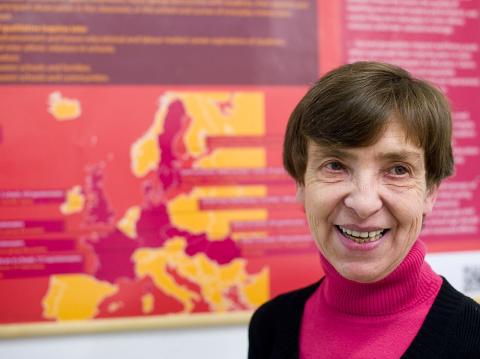 Despite policies of inclusion, compulsory education for all, and attempts at establishing multiculturalist arrangements in schools across Europe, minority ethnic students face segregation and discrimination that reinforce, perpetuate, and often even deepen their socio-economic disadvantages. This is the overall conclusion of a comparative research project conducted in nine European countries led by Associate Professor Julia Szalai, a sociologist and recognized expert on Roma and minority rights.

The EDUMIGROM project, which involved researchers from 10 universities and institutes under Szalai’s leadership, was a research initiative launched in March 2008 within the 7th Framework Programme of the European Commission. Funded by a 1.3 million-euro grant, the 36-month project studied how ethnic differences in education contribute to the diverging future prospects of minority ethnic youth, namely, second-generation immigrants in the western half of Europe and Roma in Central Europe.

The project posited that, despite great variations in economic development and welfare systems, these groups suffer similar disadvantages, such as new and intensive forms of involuntary separation, marginalization, social exclusion, and second-class citizenship. The researchers collected data from over 5,000 questionnaires filled in by young people between the ages of 14 and 17, and conducted over 500 interviews and 60 focus group discussions as well as classroom observations. Some of the key findings include:

• The notion of “compulsory education for all” is more an ideal than a reality. Evidence shows that it is mostly the children of marginalized groups and, most of all, children of poor families of minority ethnic background who are at risk of dropping out or kept behind at lower grades resulting in severe reduction in knowledge and skills.

• Educational systems across Europe select young students into specific streams and tracks that vary in content, knowledge and skills. This uneven access to education results in unequal opportunities for continuing education and restricts career choice later in life. Evidence shows that tracking works to the detriment of minority groups everywhere.

• For a decisive part, minority ethnic students are educated amidst segregated conditions, not just because their families are on the move, but also because of spontaneous processes of “white flight,” failed local educational policies aiming at raising efficiency, and minority ethnic parents’ attempts at protecting children from discrimination.

• Minority ethnic students often face deep contradictions among the values, norms, and practices imposed on them by the school and their immediate home environment. Strategies to overcome the arising tensions range from open opposition to school, to early escape from the family and/or to radical withdrawal from all social contacts outside kin relations.

• Second generation migrant and Roma children and young people seem to be strongly committed to education, despite speculation to the contrary. It is their deeply internalized conviction that one cannot build a successful adult life without proper schooling. In reality, they find it difficult to realize their aspirations due to institutional discrimination.

• Educational policies for inclusion are in themselves too weak to break the vicious circle produced by poverty, residential separation, labor market segmentation, and welfare programs with group-specific designs. Initiatives to promote “multiculturalism” can even hinder integration by separating “different” children in the name of equal rights to practice different cultures.

For more information about the project and its policy implications, see www.edumigrom.eu.

For a video interview with Julia Szalai, visit http://www.youtube.com/watch?v=0o-9JeNGAIQ.