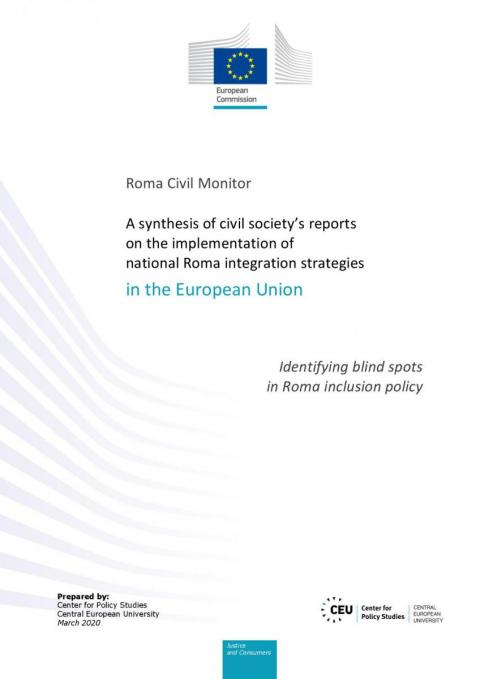 Sizeable discrepancies between the EU Member States’ declared policies on Roma integration and how those policies are implemented in practice is grounds for serious concern as they represent the main obstacle for successful inclusion of Roma and their participation in the society. The third Synthesis Report of the Roma Civil Monitor pilot project is presenting examples of such discrepancies that should also be included in the European Commission’s upcoming review of how the rule of law is being upheld EU-wide. In particular, the EU needs to robustly investigate the abuse of EU funding for implementing Roma inclusion, and together with the Member States to ensure proper implementation of the existing EU law, including the anti-discrimination and anti-racism legal frameworks, at the national and local levels.

Within the Roma Civil Monitor pilot’s third cycle, more than 90 civil society organisations and experts from 27 EU Member States have analysed the relevant public policies (or lack thereof) and reported on their “blind spots” with respect to the integration of Roma. This final monitoring cycle follows two cycles spent investigating governance issues and enforcement of antidiscrimination, investigating how antigypsyism is being combated, and investigating aspects of Roma access to education, employment, healthcare and housing. During the third phase of the monitoring, gender-related issues, youth inclusion and political participation were some of the “blind spots” reviewed.

The Synthesis Report reveals that antigypsyism has not been sufficiently tackled by the Member States’ public policies due to the weak institutional protections in place against it, creating the societal backdrop against which many other problems develop with respect to including Roma. Much more effective awareness-raising and education of the public about Roma is needed, including the promotion of Roma culture and including such material in mainstream educational curricula.

While marginalised Roma across the EU are frequently disproportionately unable to access public services for various reasons, improving that access is not a straightforward proposition. Many of the country monitoring reports have appealed for more Roma-targeted policies or service delivery, but that approach runs the risk of separate services being created that will be either inferior or delivered in a paternalistic way. The ongoing lack of data disaggregated by ethnicity makes it all but impossible to develop such targeted policies and service delivery. Disaggregated data collection about Roma and Travellers, effective monitoring of policy delivery, and impact assessments of inclusion policy are all needed.

In the rare instances where it does exist, participation and representation in politics by Roma citizens is a local phenomenon, frequently restricted to segregated communities, according to the Synthesis Report. Roma youth are said to have few avenues for participating in decision-making and making their voices heard.

The report found that in some Member States there has been a decline in traditional Roma economic activity, and antigypsyism in the labour market means Roma employment remains limited. Educational segregation of Roma is reportedly increasing, not decreasing; the ban on segregation must therefore be strictly enforced and sanctioned, and desegregation of schools should become a condition of access to public financing, especially the EU funding. More robust monitoring of the patterns of such segregation is necessary, including independent oversight, and ethnically diverse, inclusive environments in the schools must be required. More financial aid and other kinds of support are needed so that more Roma in the EU can access either higher education or vocational training.

As has become especially significant during the COVID-19 pandemic, the Synthesis Report has found that Roma continue to suffer from social exclusion in terms of spatial segregation and substandard housing conditions; due to broad public hostility against coexisting with Roma as neighbours, there is a severe lack of political will to address this. More support is needed to enable Roma and Travellers who live nomadically to do so with dignity. The under-reporting of domestic violence by Roma community members is also reviewed by the report; more Roma-targeted measures are needed to ensure Roma domestic violence victims can access mainstream services.

Roma children are disproportionately taken into state care, and the number of such children losing contact with their parents’ culture is a serious point of concern. Cultural disorientation caused by assimilatory policies has reportedly created a “lost generation” of Roma. In several Member States the problem of drug-related fatalities in Roma communities is also growing.

Many Roma families, according to the report, are distrustful of professional care for the elderly because of institutional abuse and the insensitive provision of such services. This means Roma elders are not receiving professional care they may need, while family members who are their primary caregivers are consequently under enormous pressure. Elder care services need to become more attentive to the needs of Roma elders so the delivery of these important services can reach this community of Europeans.

The Synthesis Report also found that those Roma who are asylum seekers or immigrants are less able to access support mechanisms available to other asylum seekers or immigrants, and impoverished Roma who are foreign nationals are sometimes repatriated instead of being afforded access to international protection. In the context of Brexit, many Roma EU citizens in the UK are said to be distrustful of approaching the British authorities in order to secure the right to remain there.